There is a storm, copy that.
Zondag 10 februari om 10u, Frans Masereel Centrum, Kasterlee 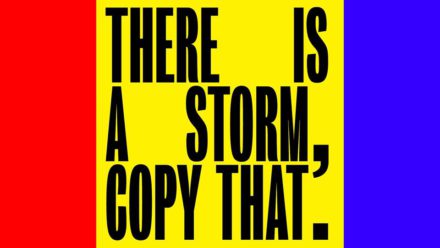 The German Thomas Meinecke (1955) was the driving force behind avant-garde magazine Mode & Verzweiflung. In the eighties he also wrote columns for Die Zeit. His short stories and novels have been published by Suhrkamp Verlag. And they have received numerous awards.
A constant in Meinecke’s work is his non-authoritarian, ‘oceanically feminine’ style, which has often been compared to that of a dj, not in the least because his work is rooted in pop culture and pop references. His books are text machines that sample the most diffuse discourses – ranging from Kronos, Leni Riefenstahl and Judith Butler to RuPaul and Mariah Carey. His ‘Hellblau’, which draws on themes like race, feminism, submarine warfare and the militant house movement Underground Resistance has been translated into Dutch, was published by Het Balanseer and was designed by Dear Reader,.

The extremely passionate Kris Latoir runs Het Balanseer, Belgium’s biggest small publishing firm and one of the main reasons why this country has something to offer when it comes to experimental literature. Evelin Brosi, Gerard Herman, Willy Roggeman: these are just a few names of authors whose work – written or recorded – has come out under the Balanseer flag.

Eva Moulaert runs Dear Reader, a graphic design studio based in Brussels. In close collaboration with their clients, Dear Reader, has been designing books and magazines, posters, graphic identities, exhibitions, websites, spatial interventions, and more for over ten years. Dear Reader, likes to take up the designer and editorial role from the start of the design process, so as to be involved in the different stages of the project. Moulaert also teaches graphic design at LUCA School of Arts.